The original Final Fantasy was titled so because Square believed it would be their last project prior to bankruptcy. Upon its release though, the game was a massive hit that managed to single-handedly pull Square back onto its feet. The game is often credited for popularizing the RPG genre. Even though many elements of FFI are archaic now, it was revolutionary for the time.

And along comes Final Fantasy II. Considering it didn’t make it to the states for a while, this installment is oftentimes overlooked when the series is discussed. Understandable considering the game is a bit of a black sheep. The leveling and dialogue systems, two key pieces of any RPG, were completely overhauled from the first game. Additionally the game had number of game-altering bugs and glitches that taint the memories of many players.

If you ask me though, FFII was a game ahead of it’s time. I pose this question, if Bethesda, the creators of the modern rpg juggernaut series The Elder Scrolls, were to make a game for the NES, would it look more like FFI or FFII? I cast my vote with FFII. Where some might say FFII is wacky, I say it was revolutionary, albeit poorly executed.

Let’s start with the elephant in the room, the leveling/class system. 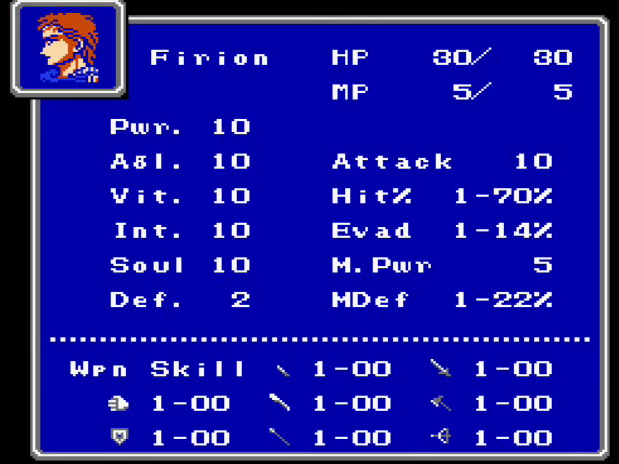 The heroes of FFII do not have levels or classes, they have skills, each of which is increased independently. Now on a logical level this makes a lot of sense. Killing something with a sword shouldn’t make you better at magic. Perhaps more importantly though, this system gives the player greater control in how characters level up. In FFI my level 10 white mage had roughly the same stats as anyone else’s white mage. FFII changed that though. The Firion that I defeated the emperor with could be very different than the Firion my friend defeated the emperor with. This really let the player feel like they were shaping the party into exactly what they wanted it to look like. The series would later flesh out the class system to allow for this kind of flexibility, but in regards to FFI, which locked each character into one of six basic classes from the beginning of the game, this system allowed for far more flexibility.

And while this system was flawed in that it sometimes rewarded players for unintuitive actions such as attacking one’s own team, I think that just comes with the territory. I for one spent far too much time hopping everywhere I went in Oblivion to increase my acrobatics skill.

Second is the dialogue system. Someone can correct me on my history here, but FFII is the first RPG in my memory that featured a dialogue system as interactive as this. The system of FFII can easily be seen as a predecessor to the branching dialogue trees of many modern RPGs. Instead of simply reading what the npcs said, players would remember and later ask about key words. They served as simple passwords in a sense, but asking a key character about different terms would prompt different responses. 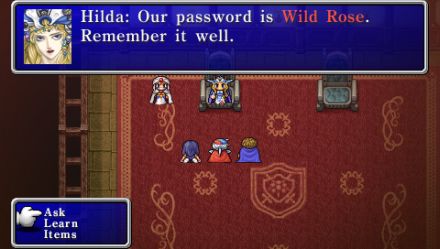 So the tree is simple, but it is a tree nonetheless. You are no longer just a passive part of conversation. Players at least feel like they are shaping the discussion.

And finally, closely related to the dialogue system, there is the story. Not just story, but storytelling as well. The story of FF2 was complex yet clear. Unlike with it’s predecessor, players rarely found themselves aimlessly wandering in hopes of finding the next dungeon or combing through every single npc in hopes of finding the clue that would progress the story. The dialogue was less archaic and more helpful. Additionally, the characters were far more developed and nuanced than what was standard at the time. There were no nameless heroes and plain princesses. Instead, characters are rich and developed. When Josef, the loving father figure sacrifices himself to save the other characters, I was heartbroken. This is the first time in my knowledge that a playable character had died as a part of a video game story. Players fought with Josef. Players trained and equipped him. And then players watched him nobly die, leaving his young daughter behind to save the other three party members.

In spite of this nuance though, the story maintains the grandiose scale the series is known for. Empires are overthrown and Lords of Hell are vanquished. Meteors are summoned and airships zoom past overhead. For the black sheep of the series, it contains and even introduces some of it’s most well know elements, like Cid and chocobos.

So even if Final Fantasy II was broken in many ways, it still deserves far more credit than it receives. It blazed a trail many would follow, and explored what expressive storytelling could look like in a console rpg. And perhaps most surprisingly, it did this in spite of the fact that a winning formula already existed. Square could have taken the safer and more profitable route of rolling out a proper sequel to the original Final Fantasy. They didn’t though, and instead we have the messy, yet undeniably ambitious Final Fantasy II.