In a recent discussion with a friend, the topic of games we’d never beaten came up. My mind jumped immediately to one hurdle. A seed of defeat that has lingered in my psyche since childhood….. DK. Donkey Kong….. He’s the leader of the bunch… I know him well.

So when I had time, I thought I would come back and kick some tail. I dug out my Nintendo 64 and revisited DK and crews’ classic adventure. Here are my thoughts. I’ll avoid calling this a review because, after peeling away the nostalgia and how amazing that intro rap was, the game aged poorly. I’ll be focusing on a few of the negatives from the experience.

Released at the height of the Collectathon craze, DK64 was a huge game. This game was bigger and featured more to collect than anything that had come before it. Another aspect of this huge-ness was the use of five separate Kongs. Each collectible was tied to a specific Kong, requiring the use of each one to complete the game. 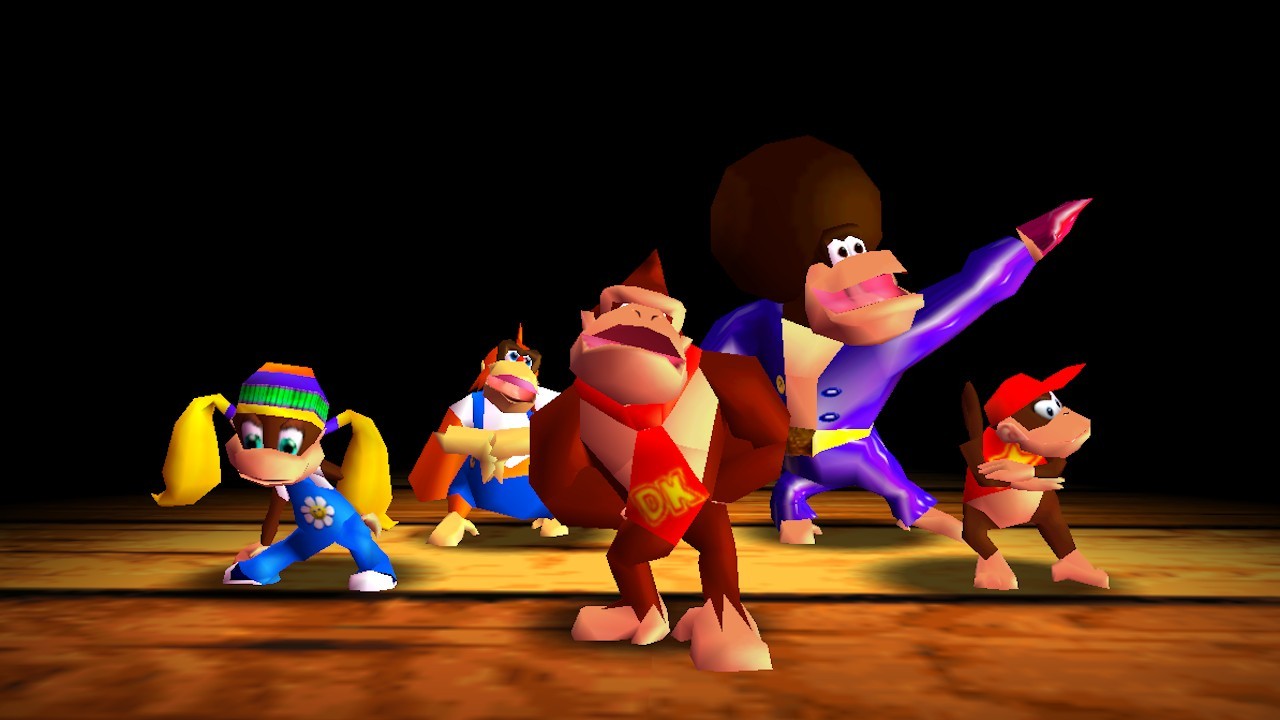 Cool right? The more playable characters the better? Ehhhhhhhh. Unfortunately the Kongs were used to inflate the size of the game artificially. The design idea was that each Kong would use their unique strengths to conquer challenges and claim those sweet, sweet Golden Bananas. See a bunch of green bananas? Then this area was probably designed for Chunky Kong and there is a Golden Banana for him nearby.

The actual implementation was that you had to complete the same sections of every level up to five times. Kongs didn’t feel that different. You could follow a path to a door and realize you need a different Kong to open the door using an arbitrary Kong-specific mechanism (colored switch, music pad, or gun target). So you backtrack to the nearest Kong barrel. You switch and open the door, only to realize that you need a new Kong for what lies on the other side. Backtrack again. Rinse. Repeat. The exception to the rule was the level Creepy Castle, where the colored bananas were used as excellent breadcrumbs to help you explore the whole level the first time through, and warp pad placement made traversing the level a breeze.

With the transition to 3d came growing pains. One that plagued many games from this era was the camera. Designers were still trying to figure out how to allow players to control the camera in a 3d space, and the Nintendo 64’s awkward controller made matters worse. For the most part, DK64 is ok in this regard. Things become infuriating when characters are truly given 3 dimensions to move around in (swimming and Diddy Kong’s jetpack) though. Those were rubbish.

Last but not least, in both this rant and the game are two easter eggs. Rare included fully playable versions of Jetpac and the Original Donkey Kong. Just kidding about the easter egg bit though. They are required to beat the game. And they pull you completely out of the normal game experience into a pit of frustration.

After you’ve found at least 100 bananas and cleared the game’s 8 levels you are face with a door. That door has a Rareware and Nintendo logos and you are reminded of something Cranky had said earlier about a surprise. That’s chill. Whatever. Another threshold of collecting stuff stands between you and the Jetpac mini game, which actually turns out to be a blast (hehehe see what I did there). I beat it in about 15 minutes and now had the Rareware Coin in hand.

After that I was lost. My newly acquired coin was not sufficient to open the door. I eventually consulted a guide to discover that I had to beat the Donkey Kong arcade game from a previous level not once, but twice to get the Nintendo Coin. Cool. I remember encountering and failing at that game. I trek back accordingly, and after 30 minutes of frustration I give up. I failed to beat the arcade game even once, and the thought of having to beat it twice was enough of a deterrent for me to put down the controller, and once again relinquish hope of beating the game.

So you win again Donkey Kong 64.