How I played it

Given all of the GOTY awards that The Witcher 3: Wild Hunt racked up, I thought this holiday season was a perfect time to pull the original out of my Steam backlog. What I found was a gritty, fascinating, and engrossing world brought to life by excellent writing. And while I had a couple issues with the game, I would still recommend it based on the strength of the narrative alone.

The Witcher’s greatest strength is by far its story and the way you get to shape it. Choices in the game are rarely easy, even if you are trying to play as 100% good or 100% evil. Choices often feel like a decision between the lesser of two evils, and the consequences may not be obvious or immediate. This means that simply reloading your save after you see the results of an action isn’t always an option. As the story progresses, two warring factions vie for your support. Deciding which one to side with, or whether to stay nuetral, is the main way the games story branches out. On one side are the Scoia’tael, also known as the Squirrels, who are fighting against the rampant discrimination against nonhumans. On the other is the Order of the Flaming Rose, a militant religious order that vows to protect Temerian society. Both groups have noble causes, but are also deeply flawed. 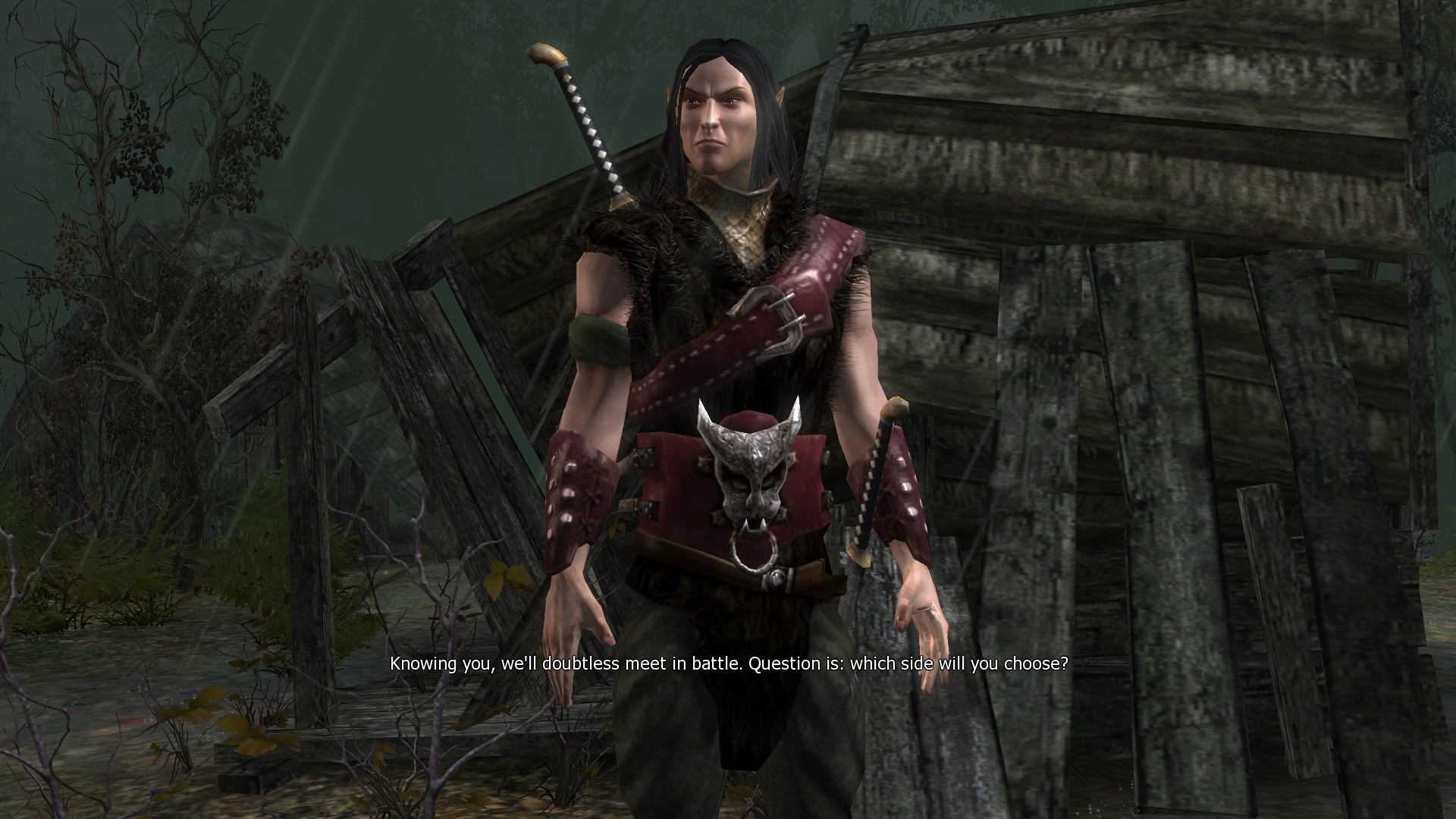 The role of a Witcher is usually to stay neutral in matters of politics and stick to monster slaying. However, staying neutral in the politics of Temeria is much harder than you might expect. Navigating the political quagmire was one of the highlights of the game for me. One instance that stuck out in particular was a posh reception full of Temeria’s upper echelon that Geralt is forced to attend. What could have been boring exposition was made fun by the diverse, interesting characters. You are given the menial tasked with finding out a princess’ favorite food, but the game uses this as a chance to introduce you to new characters and their quir ks. The Witcher makes other seemingly mundane events fun as well, such as when your friends take you out drinking and force the stoic Geralt to open up about his romantic pursuits.

This was one of the most mature and rpg offerings upon its release. In the Geralt’s world there are few who could be called good guys. The government, military, and church are all corrupt. Greed, racism, and betrayal are everywhere. You can choose to try and stay noble, or you can coerce and backstab your way through the world. Another way that the game is mature is in its handling of sexuality. It feels like Geralt can sleep with nearly every female character in the game. The women in the game rarely feel empowered though. The fact that women are throwing themselves at Geralt left and right, coupled with “collect ‘em all” romance cards and some gratuitous boob physics, left the game feeling like another male fantasy. The way the romance cards works is that each time you slept with a character you received a card portraying that character semi-nude which is added to your journal entry for that character. What results is that sex feels like a commodified mini game. Meh. 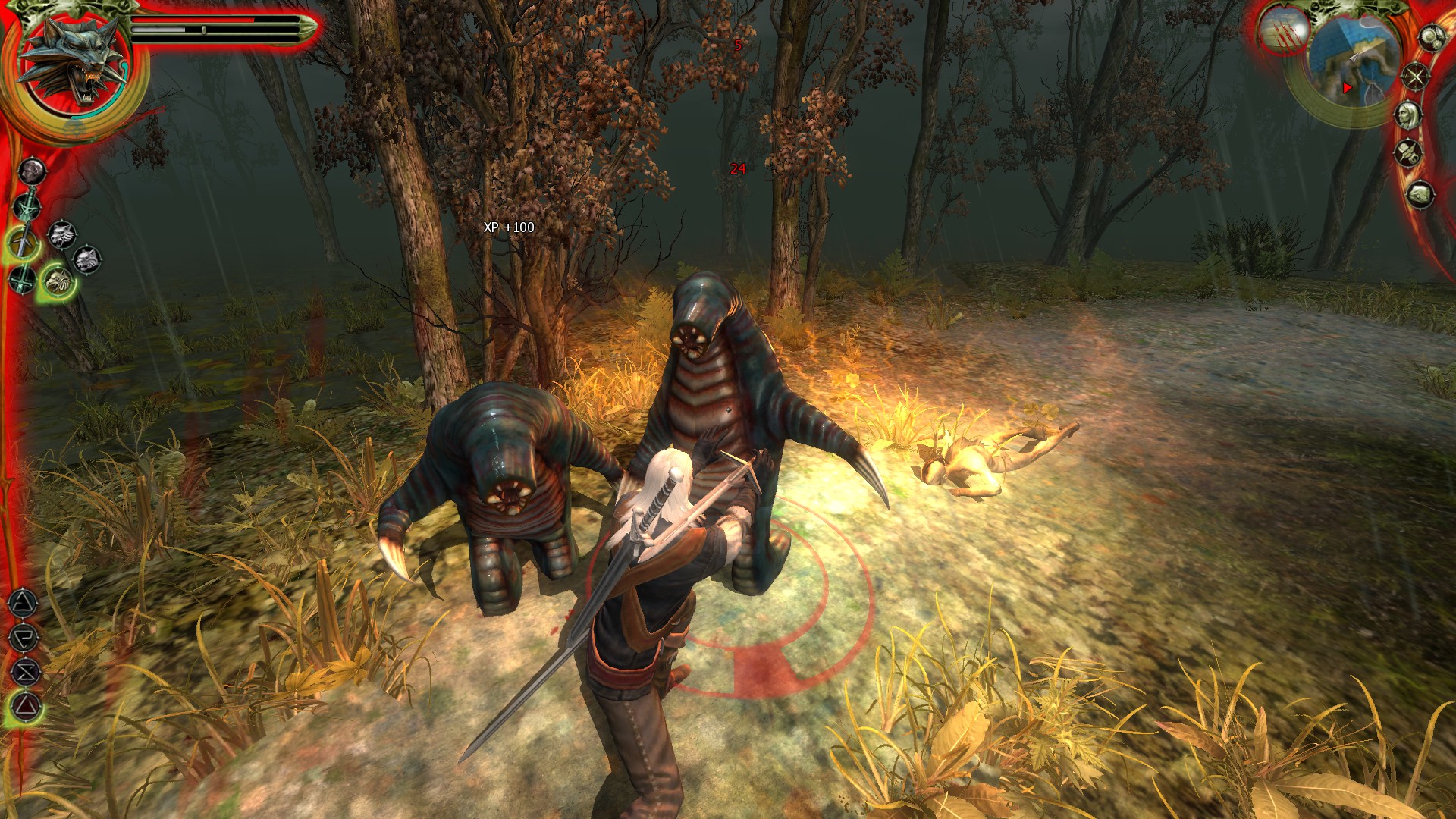 The two main issues I had with the game were with combat and the inventory system. Combat’s core mechanics are solid. Each enemy has a specific sword/combat style combo that is ideal for dispatching it, which adds some nice strategy to the each battle. Combos are chained together by time-based clicking which keeps you engaged. In addition to that there are 5 spells that you have at your disposal for dealing with enemies. The spells are interesting, and add variety to the encounters. My problem is that battles are almost always over far too quickly. Battles are really decided before they start based on the potions you drink. Actual combat, even with bosses, was usually over in less than a minute regardless of whether you won or lost. Because battles are so short, the level up system, which is interesting and detailed, doesn’t feel very impactful and strategy is not as important as it could have been. This may have been less of an issue on a harder difficulty.

The other glaring issue was the inventory system, and in particular weapon management. Throughout the game almost every humanoid enemy will drop a weapon of some sort. 99.9% of these are useless. And you cannot carry a weapon unless you have it equipped. This results in every single dropped weapon just getting in the way. It might have annoyed me more than most players, but I can’t fathom how this system made it through playtesting. Picking up items from defeated enemies was tedious already, and having a ton of useless weapons cluttering the ground just makes it worse.

Beyond those two things, there were some technical glitches that popped up. Character’s hair would occasionally oscillate wildly during conversations, and distant enemies movements animate jaggedly. On two occasions I had the game crash unexpectedly. Thankfully, the auto-save feature prevented too much frustration when that occurred. Not a glitch, but I also thought that character models were re-used far more frequently than they should have been.

Considering I haven’t yet played the Witcher 2 or 3, I can’t say much about how the first compares. From what I’ve seen, they both add polish to a game that is already very strong at it’s core. The branching story and wealth of interesting sidequests offer plenty of replay value, and you can probably snag the game cheap. I’d recommend it to anyone looking for an engrossing world who is willing to put up with some minor technical and mechanical annoyances.

Score: 3.5 Kaedwenian Stouts out of 5